UK moves into Asia-Pacific – Strategic thinking and the European dimension 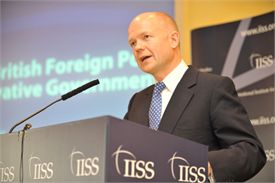 UK Secretary of State for Foreign and Commonwealth Affairs William Hague gave this speech at the IISS Fullerton lecture in Singapore on ‘Britain in Asia’.

It will receive due attention in a later post, but for now I recommend it as a good read to give some context to UK Prime Minister David Cameron’s recent tour through Asia.

Here are some excerpts:

My message today is that those who might think that British engagement with Asia is a thing of the past, or that we will become a partner of declining relevance, could not be more wrong. Today Britain is looking East as never before. We are setting our country firmly on the path to far closer ties with countries across Asia over the next twenty years; and on a completely new footing from the past.

On shedding our colonial baggage –

Mine is the first generation in Britain that cannot remember the days of Empire, with the exception of the handover of Hong Kong which I attended. In all other respects, someone like me has no recollection of an earlier time, as I was a small child when countries like Malaysia and Singapore were gaining their independence. Today, our leaders and our people approach Asia in a wholly different spirit to the past – with a sense of equal partnership, respect and the desire to see opportunity and development for all.

On the wider context –

We know that we are not alone in this new focus on Asia. At a time when the United States is shifting its focus towards the region and we wish to see the European Union take a more active role, there is a great deal for us to work on with them and many areas where we can align our efforts.

New geo-strategic order (some points resonate with my earlier post)

We are living through a turbulent period in world affairs. Economic crises have put the global economy under strain and are accelerating the re-ordering of the political landscape. The emergence of new powers means that the international order is in flux, as it is in your region.  It is a more complicated international landscape with many more centres of decision-making than in the past, and our diplomacy needs to reflect that if we are to narrow these differences. Our world is not settling into blocs that require nations to choose between East and West or retreat behind ideological boundaries. There is far greater scope for flexible relationships that cut across geography, religion and political orientation, and this is a change that we embrace in Britain.

UK as a bridge to Europe –

Hague said the word ‘Europe’ 12 times in this speech. He seems to be pushing the idea that Britain can be the bridge between Asia and Europe in a number of areas, including trade and finance as well as security. I note that in his comments on ‘why the UK?’, the spokesperson for PM Noda also referenced UK as a member of NATO, of which Japan is a partner. My emphasis in bold:

We are the country that is the most open to investment in the whole of Europe. To take just one example, 1,200 Japanese companies provide jobs for 130,000 people in Britain, and new investments keep coming in. Our ambition is to make Britain the home of Asian investment and Asian finance in Europe, and we are backing this with steps to make our tax system the most competitive in the G20. We also want Asian businesses to look to British companies as investment partners in projects in China and elsewhere…Tomorrow I will be attending the meeting of EU and ASEAN Foreign Ministers in Brunei. We believe that it is time for the EU to be more vigorously and coherently engaged with countries of the Asia-Pacific within the limits of its competences; working to break down market barriers within Europe and between Europe and the rest of the world, championing free trade agreements, and working closely together in specialist areas such as disaster preparedness.  This also involves being active on foreign policy issues in Asia, for example offering EU expertise to support regional integration in South East Asia, and taking a robust position on North Korean nuclear and missile proliferation. We will champion a long term and coherent EU approach in the years ahead, while not detracting for one instant from our own distinctive British foreign policy and enhanced relations in Asia.

And on security specifically –

We are a country that has never shirked its international security responsibilities, from our role in NATO to the Five Power Defence Arrangements which have now entered their 41st year. We are one of the few countries in the world that is willing and capable to deploy military force to address threats to human life or to security, as we did again so recently in Libya. We are not a significant military power in Asia, but our role in NATO, in the Five Power Defence Arrangements and our defence expertise as a nation mean that we have a role to play. This includes the military dialogues we are building with countries like China and Vietnam, which is another valuable aspect of our diplomacy in the region.

Cameron’s message seemed to be that ‘Britain is back’ in Asia. Hague adds a bit of nuance on the lines that ‘this time we are coming as a leader in Europe’.