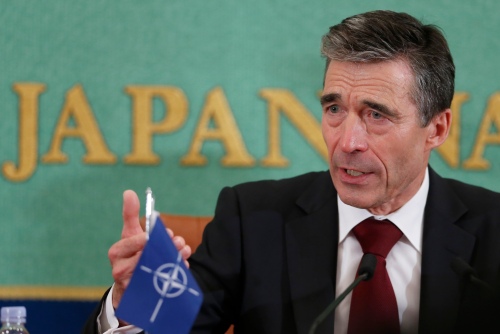 A full text of the declaration is available here. Not much of note in the text itself, but there was an intriguing if slightly confusing bit of language about what NATO is not  doing in Asia –

Then Rasmussen told reporters after the signing ceremony “While NATO has no ambition to take on a permanent role in Asia, we see very clearly the advantage of working with like-minded partners like Japan”.

But why the qualifier ‘permanent’?

NATO Secretary General to visit the Republic of Korea

NATO Secretary General Anders Fogh Rasmussen will visit the Republic of Korea from 11 to 13 April 2013.

In Seoul, he will meet with President Park Geun-hye, Speaker of the National Assembly Kang Chang-hee, Minister of  Foreign Affairs Yun Byung-se, and Minister of Defence Kim Kwan Jin.

Fogh Rasmussen gave an interview to Yonhap press agency, which offers some context. Here are the highlights:

“We are watching the development in the Korean Peninsula with great concern,” NATO Secretary General Anders Fogh Rasmussen said in an exclusive interview with Yonhap News Agency Monday at the NATO headquarters in Brussels.  “North Korea’s rhetoric, attitude and actions are provocative. North Korea’s actions pose a threat to regional and international security. They’re irresponsible; they are in defiance of the international community.  “So I have a very clear message to North Korea. Stop what you are saying. Stop what you are doing.”  END_OF_DOCUMENT_TOKEN_TO_BE_REPLACED