US calls North Korean missiles ‘an Article 5 threat’, like Syria 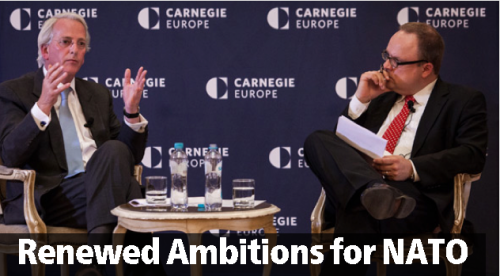 In his valedictory speech (June 17 2013 at Carnegie Europe) entitled ‘Renewed Ambitions for NATO’, US Ambassador to NATO Ivo Daalder made the following comment on the relevance of the US Pivot to the alliance [emphasis added]:

“Contrary to suspicions on this side of the Atlantic, the United States does not intend to pivot away from Europe. Instead, we continue to look to Europe as an essential partner in facing all security challenges, from wherever they may come.

Let me be clear on this point. The United States is not abandoning NATO—our commitment to security in the North Atlantic community is deep and enduring.

And we want to make sure that we face these threats collectively, as true partners.

So the question is not whether Washington will choose Asia or Europe. As my former boss, Secretary Hillary Clinton, used to say … we Americans know how to walk and chew gum at the same time. The question is whether our NATO Allies will make the commitments necessary to face 21st century dangers together.”

What does that mean in practice? Something in between more ‘strong condemnations‘ and an actual presence in Asia for the alliance (recently ruled out by Secretary General Fogh Rasmussen)?

There are some stories circulating to the effect that NATO is going to do this or that if North Korea launches an attack, e.g. ‘NATO to protect US from N. Korea Attack’ here and ‘Senior NATO Official Will Not Rule Out Conflict with N. Korea’  here).

All the hard evidence so far indicates that NATO doesn’t know what it will do until an attack or something like it occurs. The North Atlantic Council would have to first meet to discuss the situation and options for any possible alliance response in the light of what just happened. Remember, Article 5 is about an armed attack on Allies in Europe or North America, not in Asia. An interview the NATO Secretary General gave to the Japanese media on 16 April during his visit to Japan makes it pretty clear:

The key point is around minute 1:

“If a NATO ally is attacked it will probably be raised for consultation among NATO allies. NATO allies will discuss the situation and make decisions based on the specific circumstances”

This is all the SecGen can say, which is no more than an explanation of the NATO process following the NATO Charter – specifically Article 4 (discussion), rather than 5 (collective action). And yet saying ‘we don’t know what we will do’ has more influence than saying nothing at all.

As for my earlier suggestions about employing NATO’s Article 4, Philip Cane at Atlantic Community has some practical suggestions about what NATO could do before an attack by the North (read at ‘South Korea:NATO’s Asian Pivot‘).